Blue Planet II premieres January 20 (TOMORROW!!!) in the U.S.  Ed Yong called it “the greatest nature series of all time.”  Will you be watching?  If this trailer doesn’t get your heart racing, check your pulse – you might be dead.

That music, right??!!  The original score is by Hans Zimmer and Radiohead, and the lead track (Ocean) Bloom is actually a re-imagination of Radiohead’s 2011 track Bloom – which was inspired by the original Blue Planet series.  See it all come together here.

Besides being a captivating and educating series, Blue Planet II may help bring about stronger regulations of plastic pollutants.  After airing in the U.K., environment secretary Michael Gove was “haunted” by images in the series and is working to introduce stronger regulations on single use plastic bottles.  May we all be inspired to do our part.

Sonic Sea is a new documentary that highlights the ways in which industrialized ocean noise affects whales – including their communication, foraging, navigation, and stress. You can see the film on the Discovery Channel or at various screenings around the country.

“Oceans are a sonic symphony. Sound is essential to the survival and prosperity of marine life. But man-made ocean noise is threatening this fragile world. Sonic Sea is about protecting life in our waters from the destructive effects of oceanic noise pollution.”

On July 7th (@ 7PM), there will be an Oceanview Foundation screening of Sonic Sea at the Block Island Library – hosted by [fantastic former MSC student] Mary Cerulli and the Nature Conservancy.  Check out this great write-up about the event (by Mary) in the Block Island Times:

Researchers at Cornell University and University of Queensland are offering a FREE 4-week online course on shark biology & conservation, to coincide during Shark Week 2016. The faculty includes Dr. Willy Bemis (former director of the Shoals Marine Lab) and Dr. Ian Tibbetts (who I had the pleasure of studying with as an undergrad while abroad in Australia).  Class starts June 28th – it’s going to be a good one!  Register online.

Shark Week 2015 is especially auspicious because it coincides with the 40th anniversary of Jaws.  The movie is having a limited re-release in theaters this summer.  In its heyday, Jaws spawned a culture of fear and panic about sharks.  Regretful of the carnage in the wake of his creation, author Peter Benchley later became a major advocate for sharks and dedicated his life to promoting their conservation. 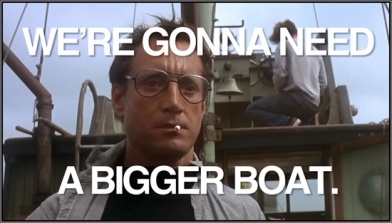 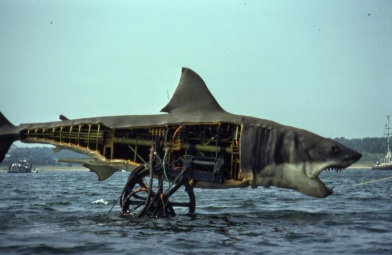 Shark Week also promotes the mission of shark conservation through research and education, and has helped change the conversation about sharks – from seeing them as man killers to awe-inspiring top predators.  As shark populations increase, due to better protection measures and rebounding prey populations, scientists are beginning to piece together the mysteries of their lives and habits.  An example is the global tagging initiative by Ocearch, which makes tracking information of its study animals freely available online.

In a sign of the times, when a great white shark stranded alive yesterday on a beach in Chatham MA, not far from the waters where Jaws was filmed 40 years ago, beach goers rushed to save it.  Happily, it was rescued, revived, tagged, and eventually released.  [UPDATE – 07/19/2015]: Jameson (the rescued shark) survived the ordeal and is still trolling the waters off Cape Cod.)

If you need your shark fix while you wait for Shark Week 2016, check out the following programs that feature Dr. Greg Skomal, BU Marine Program grad and shark expert.  And “live every week like it’s shark week” -Tracy Jordan, 30 Rock

Last night, I finally watched Antarctica: A Year on Ice and really enjoyed it.  New Zealander (and frequent Antarctica over-winterer) Anthony Powell has been filming the landscape and conducting interviews with fellow workers for over 10 years.  The result is absolutely unbelievable footage and insight into what it’s like to visit and work in the southern polar zone.  The scenes of the Southern Lights will catch your breath.

Marine plastic debris is a problem of overwhelming concern, from how the massive quantities of material that have accumulated in mid-ocean gyres (areas of ocean circulation that retain particles in slow moving whirls) to the effects of plastic debris on marine animals that accidentally ingest it.  MIDWAY – Message From The Gyre is a documentary that focuses on the albatross, which uses Midway Atoll for nesting.  Albatross chicks are unwittingly fed plastic by their parents, who are foraging in the Pacific Garbage Patch – a floating mass of plastics and other trash in the tropical Pacific Ocean.  The chicks starve to death, despite their stomachs being full [of plastic trash].

Michael Moore published a wonderful essay in the ICES Journal of Marine Science this winter.  It’s definitely food for thought, and puts the debate against commercial whaling in an interesting perspective.